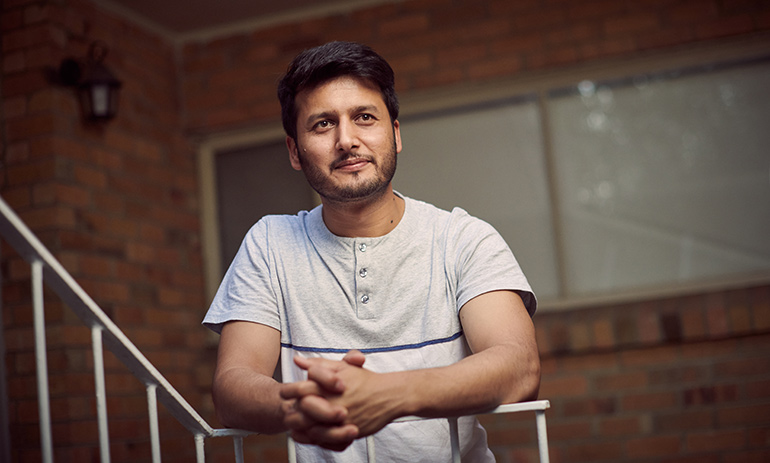 HomeGround Real Estate works like any other agency, with one exception – it is actively trying to solve the growing housing crisis, writes Maggie Coggan in this month’s Spotlight on social enterprise.

For nearly 10 days last year, Sayed and his wife were trapped inside Kabul airport, unsure whether they would ever be able to leave.

“We had no food, no water, nothing,” Sayed told Pro Bono News.

Like thousands of others, they were desperately trying to flee Afghanistan following the Taliban offensive which lasted from May to August 2021.

Although leaving his home country and his extended family was a tough decision, Sayed said if he and his wife hadn’t seized the opportunity to come out, they might not have survived.

“I left my mum, dad and brothers behind and I didn’t feel good about it. I still pray every day that they are alive,” he said.

When they finally arrived in Australia at the end of August 2021, they were assigned to a charity case manager and placed in an onshore refugee center in Melbourne.

It was during this time that they were connected to HomeGround Real Estate, and their lives changed forever.

Established by Launch Housing in 2014, the Victorian housing support and homelessness charity, HomeGround Real Estate operates like any other agency, providing rental management services at a competitive price.

What sets HomeGround Real Estate apart, however, it offers property investors and landlords the option of renting their properties either at market rent or below market rent – ​​which is usually around 10% lower.

Additionally, all profits generated from property management fees are reinvested into the Launch Housing programs for the homeless and public housing.

In the past fiscal year alone, the organization have seen a 61% increase in the number of properties they currently manage (they currently have 120 properties on their books)generating over $550,000 for Launch Housing homelessness services.

HomeGround Real Estate director Simone Curley told Pro Bono News that with a rapidly declining number of affordable rental properties on the market and a 10-year waiting list for social housing in Victoria alone, the platform gives owners and investors a chance to give back to their communities.

“It’s a way to tap into the private investor market to get more properties managed at below-market rent,” Curley said.

“And even if a landlord doesn’t want to rent their property below market rent, all proceeds are donated to Launch Housing so they can do the work they do to fulfill their mission to end the crisis. ‘roaming.”

One such owner is Philip Endersbee. Wanting to support an Afghan evacuee after the Taliban takeover, his property manager HomeGround Real Estate worked closely with the refugee charity, AMES Australiato find a couple who could rent Endersbee’s apartment.

That couple ended up being Sayed and his wife.

“There were 1,000 families in the Melbourne Refugee Center with a kitchen for all of us… there were so many people there and we were really looking forward to getting out,” Sayed said.

“We were told about the house, I went to see it and immediately agreed to live there, it was freshly painted and really nice. The owner, Philip, even agreed to help us move in early because we were so desperate to get out of the refugee center.

Endersbee insisted on letting the couple live in the apartment rent-free until they both found work, and even helped Sayed land a job.

“He said there was a vacancy in his organization, so I sent my resume and was able to start working right away,” Sayed explained.

“I called my family to tell them that although I couldn’t bring my uncle here with me to Australia, I had found an uncle who was giving me his house rent-free and helping me find a job.”

“We have seen landlords who, when they first give us their property, have to charge market rent. But as time goes by and they accumulate equity in their home, they can lower the rent, and that’s just beautiful.

Curley said she hopes the idea of ​​social enterprise real estate agencies will grow into a movement that, over time, isn’t limited to a handful of investors.

“I would love to see organizations like HomeGround Real Estate really take off, and I think that’s entirely possible.”

A new beginning and a new life

In just six months, Sayed has been able to settle down, land a job, and is looking forward to a promotion. Now they are preparing for the arrival of their newborn.

“Obviously I’m very sad to have left Afghanistan, but there was no chance of a good life for us and our baby… him or her… it’s going to be a surprise for us when the time comes” , he said.

“All the things that happened in a month for us, like finding a house, finding a job, buying a car, I didn’t expect to happen for two years…and it’s all thanks to Philip and HomeGround Real Estate,” he said. .