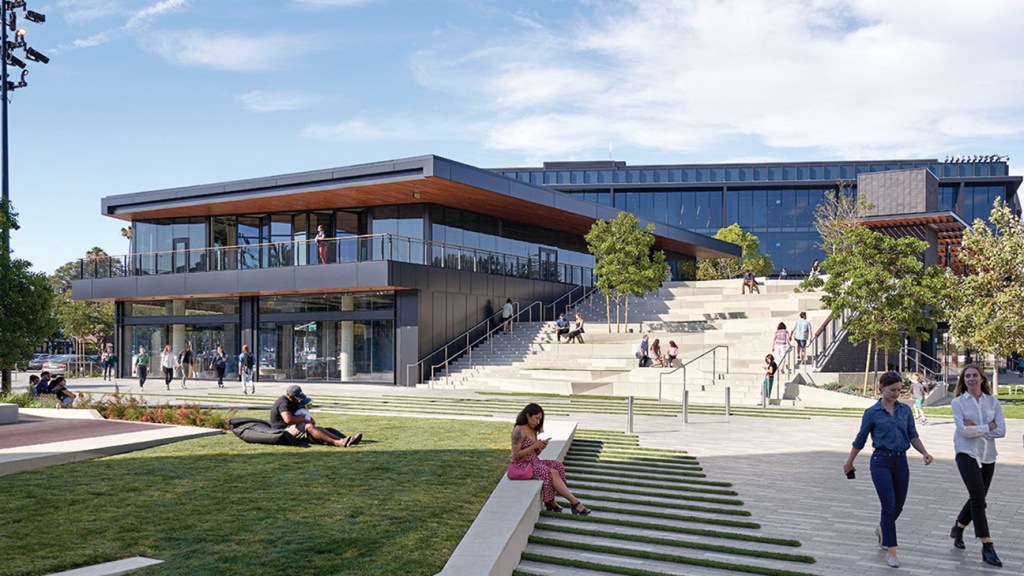 In 1995, Adam Lilling, founder and managing partner of PLUS Capital, a venture capital consulting firm that helps talent invest in startups and build brands, moved into an office in Culver City, whose days of glory as a home of MGM and RKO were gone. “The office we were in was always leaking – if it was raining you were in trouble,” he recalls. “You just drove to work and got out of there. [Culver City] was not a place you wanted to stop and hang out. … My perception was that it was just a sleeping place and warehouse.

Fast forward to 2021: Amazon Studios, WarnerMedia, Apple, and TikTok have all occupied offices in the city for the past four years, joining Sony, which bought the old MGM studios in 1990. On October 8, Apple announced he was further increasing his presence in Culver City; it is building two new connected facilities along National and Venice boulevards in what will be a headquarters of over 550,000 square feet for its teams across the region.

Lilling (who has lived in Culver City since 2008) can’t believe the changes he’s seen. “It’s mind-boggling what’s going on here,” he said. Jeff Pion, vice president of powerful commercial real estate player CBRE, agrees. Culver City, he says, is now “one of the world’s content capitals. [and] one of the most dynamic markets in Los Angeles.

Colin Diaz, president and CEO of the Culver City Chamber of Commerce, says the development of the Hayden Tract area over the past decade has marked a turning point for the city. Once a dilapidated light industry district, the district has been transformed by architectural firms like Eric Owen Moss and development groups like Samitaur Constructs and Newmark into a cutting-edge mixed-use business center for startups. technology, advertising agencies and design firms.

New demand for streaming content, the arrival in 2012 of the light rail with the Expo line, an abundance of existing studio infrastructure and a central location all worked in Culver’s favor. “It’s the center of the donut in that it’s very central to West LA, Santa Monica, Beverly Hills, Pacific Palisades, Malibu, Hollywood, Silver Lake, and Manhattan Beach,” says Pion.

One of the largest owners is Hackman Capital Partners, which bought Culver Studios in 2014. It leased most of the complex to Amazon while expanding it. Hackman has invested millions in developing the adjacent mixed-use development The Culver Steps, which has 45,000 square feet of retail space and 80,000 square feet of office space (where Amazon has also leased), and in January has spent $ 160 million to buy the Sony Animation Studios campus.

Other major developments include One Culver from CBRE (renovated in 2017 by Gensler), where Apple leased over 150,000 square feet, and the $ 350 million mixed-use Ivy Station from Lowe Enterprises, where WarnerMedia (including HBO) rented a space. Entertainment and tech companies are also buying. In 2020, Apple purchased an entire block of warehouses and offices for $ 162 million in partnership with Venice Pacific Investments. (Apple’s first foray into Culver City was in 2014 when it moved its Beats by Dre division to offices there.)

In the second quarter of the year, the prices charged for office space in Culver were $ 4.34 per square foot, up 17% from Greater LA, per CBRE.

The influx of powerful players has brought countless support companies seeking office space in the region. “A lot of these companies are peripheral to cinema or television, and they are able to work directly with the biggest players in the community. They have formed their own ecosystem here locally. said Diaz.

CBRE Pawn calls the city “a wonderful place to do business.” It’s a small town, the city officials are responsive, they are accessible, it’s a fantastic business environment.

Other entertainment companies that have moved to Culver City include video game company Scopely, which opened an office there in 2013 and has since more than doubled the amount of space it rents. A Scopely spokesperson explains why it chose to locate in Culver City (it also has offices in Europe and Asia): located in a city and appealing to a creative and innovative vibe.

The boom certainly increases the number of jobs. Diaz estimates that the influx of the industry will bring between 7,500 and 9,500 jobs to the city. In April 2021, Apple alone announced that it planned to have 3,000 additional employees in Culver City by 2026. As of 2019, Sony Pictures Entertainment is the city’s largest employer, with around 3,000 people working working there.

To ensure residents benefit from the meteoric growth, the House is launching a program called Hire Culver. “We aim to have a job site where residents can apply for positions a few weeks before opening them to the general public,” says Diaz.

However, not all of the city’s 40,000 residents are happy with the pace of change. There are traffic concerns, which City Council hopes to alleviate by increasing micro-transportation options (i.e., small-scale, on-demand transit). And some residents fear their quaint town may lose its soul as high-priced condominiums soar and the median home selling price hits a record high of $ 1.3 million in 2021.

The influx of jobs in the entertainment industry has also brought in increasingly hip restaurants and high-end retail stores, such as in the 5-year-old Platform retail project. “[The residents] will always refer to things like Mayberry. It does not matter. If it all ended today, it will never come back, ”says Diaz. Among the recent restaurant openings is Etta, by Chicago-starred chef Danny Grant, who just made his debut at the new Shay Hotel, part of the Ivy Station development.

Producer Dave Ragsdale (Pink Opaque), who has lived in Culver City for seven years, compares the changes to what his old Cobble Hill neighborhood in Brooklyn went through in the early 2000s. “I know there was a loss to the community and character of Culver City, ”he said. “But we’re pretty happy with downtown and all the restaurants that pop up.”

A version of this story first appeared in the October 6 issue of The Hollywood Reporter magazine. Click here to subscribe.