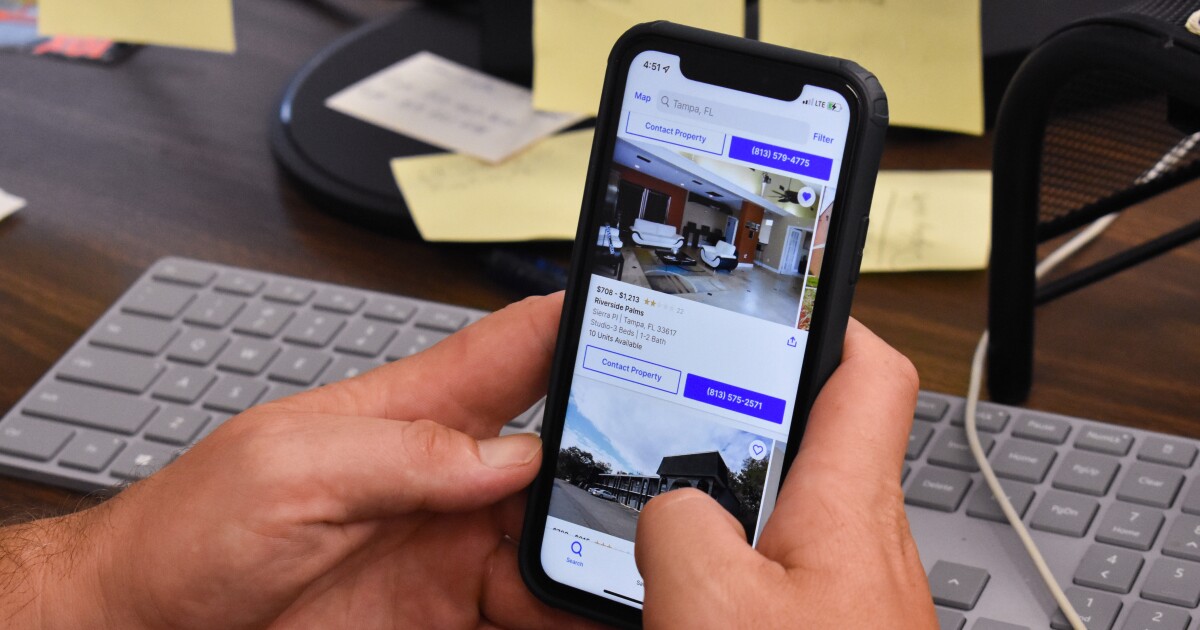 Renters looking for an affordable home in the greater Tampa Bay area have another hurdle to overcome: Internet scams.

Many are of the low-dollar variety, like the one that trapped Dominic Cwiklinsi in June.

Cwiklinsi was looking for Zillow in June when he spotted a rental in his monthly budget — a rarity in Tampa Bay’s booming market, he said.

Eager, he applied through a third-party website, electronically paid the $30 fee, and never heard back.

Although the online listing seemed legit, Cwiklinski believes he was the victim of a rental scam created to fish for application fees. He said the property remained listed for more than a month, likely faking hundreds of potential tenants like him.

“They’re trying to get you to send money, or an application fee, to hold the spot,” he said. Sometimes ask for a security deposit or first and last month’s rent. And often request that the fees be paid up front, without visiting the property.

Authorities say such scams are becoming more common in the greater Tampa Bay area. With little inventory and lots of people looking for a home, the housing market is ripe for scammers.

On its website, Zillow warns about this type of foul play, saying it could happen on any website where users can self-post rental listings, including Craigslist, eBay, and Facebook Marketplace.

“This is especially true if you have a tight deadline to find a place, which makes it even more important to be on the lookout for potential fraud,” according to a published advice sheet by the real estate site.

“I can’t describe the frustration,” Cwiklinski said. “It’s like – you don’t know what to do next. What else should I try? What else box I’m trying?”

Better known as “Coach,” Cwiklisnki teaches health and leads the track program at Tampa Bay Technical High School. He hoped to find new accommodation before the start of the school year.

“The last four years I’ve lived in an apartment complex,” he said. “And the rent has almost doubled in two years.”

For now, he lives in a suitcase in a friend’s extra bedroom. Before and after school, during lunch and between classes, Cwiklinski combs through rental ads on half a dozen mobile apps.

Now that he knows what to watch out for, he estimates he’s spotted around 100 fraudulent ads.

The center, which serves as a clearinghouse for complaints from victims of Internet crimes, defines real estate scams such as loss of funds reported by fraud involving rental or timeshare property, including higher schemes.

Hillsborough County accounts for nearly half of those reports in the greater Tampa Bay area, with 132 people reporting losses of about $3.5 million in 2021.

Between January and July, the number of complaints and the amounts of losses per month were on an upward trend in Hillsborough, Manatee and Pasco counties compared to 2021. Notably, in Pasco County, losses have more than doubled for real estate scam victims – from almost $790,000 to over $2 million in less than 12 months.

Special Agent Andrew Sekela of the FBI’s Tampa Division predicts that the actual amount of casualties for real estate victims in the Tampa Bay area is two to three times higher than what has been reported. In his former role at the FBI, he led the region’s white-collar crime division and worked closely with financial institutions and the real estate industry.

“Based on my experience here for 10 years, there are a lot of fraudsters in Tampa,” Sekela said.

He said not all real estate scams warrant a response from law enforcement.

The most common low-cost real estate scam — like the one that ensnared Cwiklinski — is called “adverse possession.”

“It’s when someone takes possession of a property that they don’t rightfully own,” Sekela said.

Traditionally, scammers planted fake “For Rent” signs in the front yards of vacant properties to which they had no right. Sekela said it was a popular program in the early 2000s when there was an equally heightened interest in the housing market.

Since then, real estate fraudsters have moved online. Although the strategy has remained the same: scam an application fee, a security deposit or even start collecting rent before the process is complete.

These days, scammers grab images from legitimate listings and advertise them on websites like Zillow, eBay, Craigslist, and FaceBook Marketplace – impersonating the owner.

Tampa real estate agent Tiffany Prete said she was warned about this type of activity but was still surprised to find one of her own properties chained in a rental fraud scheme .

“It took my breath away,” she said.

In July, Prete sold a house in New Port Richey for nearly $500,000 to out-of-state buyers. In August, buyers put the house up for rent on Zillow and found tenants within days, according to buyer’s agent Tetiana Gapych. About a week later, a fake rental ad surfaced on Facebook advertising the house for $2,500 a month.

To justify the involvement of local law enforcement or the FBI’s Internet Crimes Squad, Sekela said the amount of the loss had to exceed a six- or seven-figure threshold, as defined by the district attorney’s office. American.

He warns tenants and real estate agents to beware of these loftier schemes: Some scammers will pretend to offer mortgage refinance services and then pocket payments from borrowers. Others may hijack legitimate business email communications, such as a real estate agent and home buyer, to intercept high-value transactions, such as a down payment on a home.

Sekela’s advice: Trust no one.

“If you get an email or a text, or even a phone call from someone, verify that they are who they independently claim to be,” he said. “Don’t take them at their word for that.”

Tenants must verify the identity and real estate license of their real estate agent on the website for the Florida Department of Business and Professional Regulations. Land ownership must also be verified on the county real estate appraiser’s website.

“It’s hard these days to know exactly what’s good enough because fraudsters…the more they’re engaged in a scheme, the savvier they become.”

Rose Burke is all too familiar.

She has already been scammed. So she knows all the telltale signs of rental fraud. And yet, in August, she almost fell for a real estate scam. This time: on a website suggested by her daughter’s social worker.

“I guess there’s no website you can really trust,” she said.

Burke works from his home in Carrollwood as a telesales agent. In her spare time, she combed through rental listings for her daughter, a single mother of five who qualifies for Section 8 housing.

While browsing, Burke said a man messaged him on the Affordable Housing website, which collects rental properties that accept housing vouchers. The post provided an address for a lovely yellow house 15 minutes away and the person who said he was the owner encouraged her to stop by and check it out.

“And so I went. I was looking out into the garden – oh my god – looking out the windows,” she said.

After leaving, she called the number on the “For Rent” sign posted in the front yard and learned that the man she was communicating with was not the landlord.

“I think they’re targeting low-income people, because I think there’s some desperation,” she said.

Burke knows how to verify the identity of real estate agents and double-check property records. But, she says, most people don’t.

Tampa realtor Gary De Pury, who is also an attorney, advises renters, “If it’s too good to be true, it probably isn’t.”

Quite simply, he said, fraud follows booming business. And in an affordable housing crisis, rental scams are a symptom of desperation.

Unlike New York or San Francisco, where average income competes with the cost of housing, De Pury said wages in the greater Tampa Bay area are out of step with “astronomical rent increases.”

“Every few months I seem to get a request from someone who has been abused and they want me to go get the money back,” he said.

But there is rarely a legal route to recoup victims’ losses.

De Pury said the best prevention for tenants moving out amid the affordable housing crisis is more awareness.

“If the Tampa Bay area can be 10% more aware,” he said, “the scammers will move on to another area.”

Gabriella Paul covers the stories of people living paycheck to paycheck in the greater Tampa Bay area for WUSF. She is also a member of the Report for America body. Here’s how you can share your story with her.