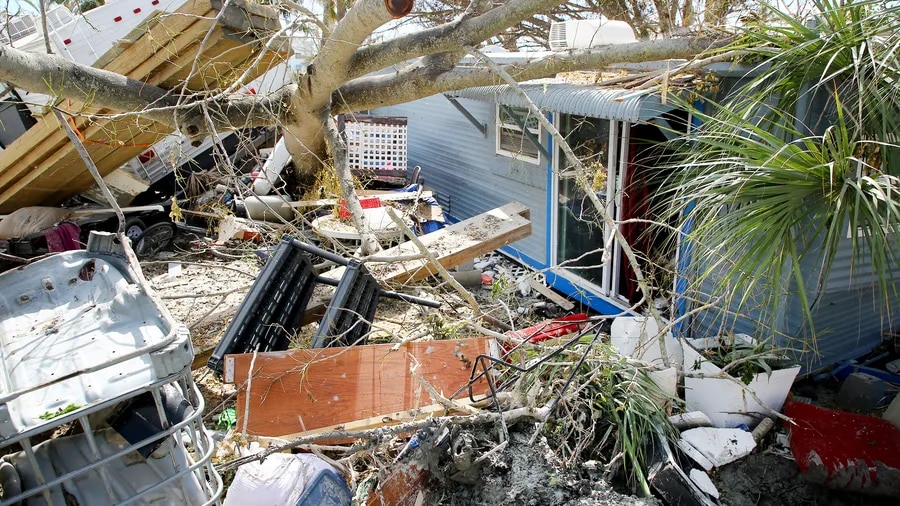 Ian has taken over a corner of the state that in recent years has been one of his strongest magnets for newcomers, turning once swampy land into housing estates and restoring Florida’s appeal to booming. Fort Myers and neighboring Cape Coral ranked as the nation’s hottest housing market this year, according to federal data. After a steep turn before landing that surprised authorities and hampered evacuations, Ian has, for now, broken that magical spell. Learn more from the Financial Times and Forbes.

The property insurance market in Florida was already under stress. Ian could make it worse

Even before Hurricane Ian made landfall in Florida last week, the state’s property insurance market was already in its own state of disaster. Homeowners in Florida pay the highest premiums in the country: nearly three times the national average, according to the Insurance Information Institute, an industry group. And Floridians’ premiums are growing much faster — about 33% each year — than the typical American’s 9% annual increase. But in Florida, hurricanes aren’t the only factor driving up costs. [Source: NPR]

The affordable housing crisis after the storm

Affordable housing in the United States typically declines after a disaster, and experts expect parts of Southwest Florida to experience the same after Hurricane Ian. It’s a pattern that exacerbates inequalities in relief and recovery efforts – and leaves thousands of people with nowhere to go. A number of factors contribute to the reduction in the supply of affordable housing—defined as costing 30% or less of a household’s income—after a disaster. [Source: Axios]

Flooding from Hurricane Ian is expected to persist in the Orlando metro area as rivers continue to rise and floodwaters can cause billions of dollars in damage to homes. “At the end of the day, a lot of people should have had [flood insurance] who didn’t,” says Greenberg Traurig attorney Fred Karlinsky. Flood insurance is not common coverage among homeowners inside Orlando. Data from the Federal Emergency Management Agency (FEMA) shows 12,055 active flood insurance policies in Orange County, which would cover 2% of the 575,826 housing units that the US Census Bureau reports. are in the county. [Source: Florida Realtors]

How Traveling the World Shaped One of Florida’s Top Brokers

The city of Miami has made a name for itself. With its world-famous beaches, gourmet restaurants and unique cultural backgrounds, Miami stands apart from the rest. Being one of the largest metropolitan cities in the United States has resulted in a booming real estate market. Broker Ivory Cooks has been working within the real estate community for 33 years, with its primary market being primarily in Coconut Grove and Coral Gables. Not only has Cooks been part of Coldwell Banker Global Luxury® for his entire career, he also sits on the board of directors of the Master Brokers Forum, an organization of South Florida’s elite residential real estate professionals. [Source: Vegas Magazine]

STATS OF THE WEEK
$30 million
A luxury multi-use property that has been looking for a buyer for years is back on the market as the Orlando metro’s most expensive home listing. [Source: Orlando Business Journal]

› The rental market is expected to increase with the move of Ian’s Exiles to Palm Beach, Broward [Boca News Now]
With local home sales plagued by headwinds, rental markets in Palm Beach and Broward counties are expected to rise as Hurricane Ian exiles seek temporary homes while theirs are rebuilt. And in some prices and locations, those looking for new homes may end up moving to South Florida altogether, preventing the housing market from completely collapsing.

› Two Florida real estate agents win charitable recognition [Florida Realtors]
The National Association of Realtors® (NAR) has announced its 2022 Good Neighbor Awards winners, and two of those recognized are Florida Realtors®. MaliVai Washington with Diamond Life Real Estate, Jacksonville Beach, founded the MaliVai Washington Youth Foundation. NAR named him one of its past five Good Neighbor Award winners. Also, Debbie Miller of Webpro Realty in Lakeland received an honorable mention for her charity, kidsPACK, which feeds 3,000 children on weekends when they don’t get lunch at school.

How the “sunset sale” affected our real estate business