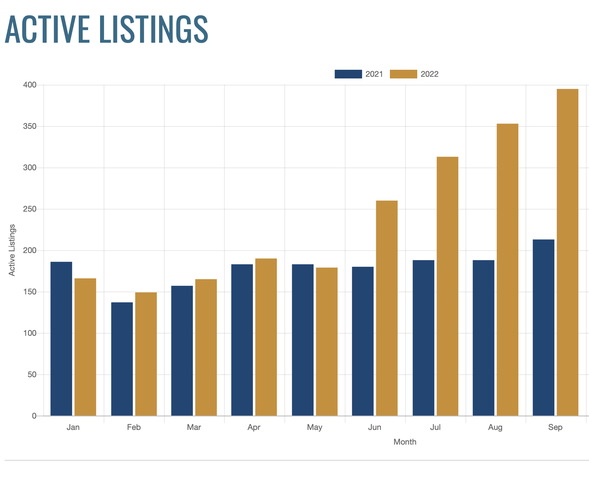 Home sales slowed and their average selling price fell in Newton County in September, according to statistics from the Georgia Multiple Listing Service (MLS).

Fewer homes came on the market and the number of homes for sale increased in September, according to the Georgia MLS.

“Sales have slowed and median home prices are starting to fall, as seen in the Newton County and Atlanta market,” Ryan said.

This is a reversal of the post-pandemic trend that houses are in such high demand that they typically sell above asking price within days of going on the market.

“We haven’t had a lot of good fluidity in the market,” Alexander said.

The Georgia MLS reported that the number of homes sold fell 18% — from 156 in August to 128 in September — in Newton County.

• The median selling price of a home in Newton County fell 2.6% from $313,250 in August to $305,000 in September, signaling a possible drop in demand after the rate average interest rate for a 30-year fixed rate mortgage has averaged 7.20%.

The average rate is double the October 2021 rate and the highest since 2001. The Federal Reserve has raised the prime rate in recent months in an effort to curb inflation.

• Active listings of homes for sale increased by nearly 12% in one month, going from 353 in August to 395 in September.

Ryan said consumers are considering when to buy a home during an economic period that has seen rising prices for everything from gas to groceries.

“Belts are getting tighter, which has led to slower home sales,” Ryan said.

However, Ryan also said those looking to buy a home in Newton County have more options than in recent months.

“The increase in inventory has given consumers more options to choose from and a stronger position in negotiating the selling price,” he said.

Alexander said the Newton County residential real estate market is still considered a seller’s market — with sellers having a price advantage over buyers — due to months of inventory of homes for sale.

He said there was about 2.1 months of inventory (MOI) in Newton County, which means it would take just over two months to sell all the homes currently on the market if no new was not added.

The market is not considered a seller’s market until about six months of housing inventory is available, Alexander said.

Alexander said he expects inventory to continue to rise in Covington and Newton County.

The attention the area is receiving from job-creating businesses in industries such as filming will prompt homebuilders to add more inventory due to anticipated demand, he said.