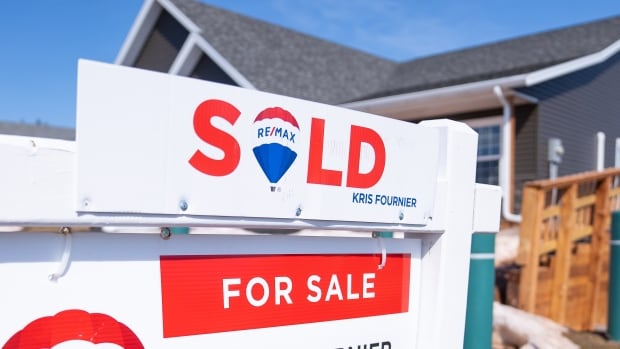 Nationally, the market showed signs of slowing in March as the number of homes sold and the average selling price declined from the previous month. But that’s not the case on PEI.

“But I wouldn’t be surprised, with interest rates rising and records rising, that there is a period of flattening – I just haven’t seen that yet.”

The latest statistics show that prices continue to rise, for now. According to the PEI Real Estate Association, of the 194 homes or units sold in PEI. in April, the average price was a record $414,742, up more than 20% from April 2021.

Despite these record prices, there were fewer homes sold in April in PEI. — almost 23% less than last April’s record sales. In the first four months of 2022, there were 9% fewer home sales than the same period last year.

This is partly because there were fewer homes available for sale – what agents call low inventory. The number of new registrations on the island in April, at 265, was down more than 17% from April 2021.

None of this is good news for buyers hoping the market will cool down so they can buy their first home or move into a bigger home.

“If housing prices were to come down a bit or if there was a slight correction, you might think that might make it more affordable for people entering the market,” Marjerrison said.

“But if interest rates continue to rise, it could put more pressure on affordability in terms of monthly payment and stress test, which could stabilize it.”

Buyers might need a larger down payment to keep their monthly mortgage commitments more manageable given the higher interest rates, he explained.

“It’s a bit of a ball game when you’re juggling interest rates and house prices.”

Shaun Cathcart, a senior economist with the Canadian Real Estate Association who spoke to CBC PEI from his home in Ottawa, said prices were rising more slowly than a year ago, representing “a very slow increase.

“Our forecast is for things to flatten out and to some degree… they have,” he said.

The surge in mortgage rates in March led to a rapid cooling of more expensive markets in Canada in April.

“Not so much in Prince Edward Island,” Cathcart explained. “More affordable markets tend to be more immune to interest rate hikes like this.”

The wild card for the maritime provinces of Prince Edward Island, New Brunswick and Nova Scotia are out-of-town buyers who have just sold their homes in a hot market and who have a lot of money to spend, he said. They don’t care about mortgage rates, he said, because homes are still relatively affordable.

“It’s a blessing and a curse that this can keep activity at a higher level than what you see elsewhere in Canada, where we’ve seen big downturns, but it’s also not ideal for locals. vying for a near-record inventory of homes for sale.”

Marjerrison said he’s heard from potential buyers who have decided to keep renting until house prices come down.

If Cathcart’s predictions hold true, those buyers could be waiting a very long time.

In fact, he said the current market could make it even harder for locals who have been shut out of the market in recent years.

“I think it’s going to make it worse,” Cathcart said.

“Usually what happens when the markets go down is you get a disconnect between buyers and sellers: sellers still want what the house across the street sold for last year, and buyers don’t are unable to offer as much, or are unwilling, and so on. happens if the deal doesn’t happen.”

Low inventory will rebuild as those homes stay on the market longer, he said, and prices will eventually flatten.

“You go from everything that sells to multiple offers, to the nicest homes that still get their asking price and to some of the others that stick around,” he said.

“That’s what I would expect: flattening prices and a more normal number of sales. And that’s what our forecast is for most places in Canada.”

Mortgage rates will drive the change, Cathcart said. Bank rates, which were 3.3% last month, increased by nearly one percentage point in one month, to reach 4.1%.

“The market is exiting ahead of what the Bank of Canada is expected to do, which is to move from the current 1% overnight rate to almost 3% by the end of this year,” he said. he declared.

Fixed bank mortgage rates have already priced in that forecast, he said.

The good news is that if you’re looking for a mortgage now, interest rates are unlikely to rise much further, he believes.

“It’s just going to be the floating rates catching up with that over the rest of the year,” he said.

“It will increase inequalities”

The combination of all these factors will hit first-time buyers the hardest.

Homeowners have had several years to build up huge equity in their homes, Cathcart said, meaning those looking to move will continue to outbid newcomers.

“If anything, it’s going to increase inequality, which is bad enough,” he said. “Where the haves can continue to have and move around, and the have-nots, it’s just harder for them to acquire their first home…It’s unfortunate.”

Cathcart said CREA is encouraging politicians to invest more in new housing. It’s the only way for them to ease the housing crisis, he said, but it’s easier said than done.

He believes the key is higher-density, multi-unit development, like townhouses with “less space for cars and more space for people.”

“Affordability is going to go through the reduction in the scarcity of housing, because the population will continue to increase” with international immigration, he declared.

Housing scarcity has in turn put and will continue to put pressure on rental markets, Cathcart said, and even rules out rental for low-income Canadians.

“Maybe it’s a bit depressing…but these are things we have to think about,” he said.