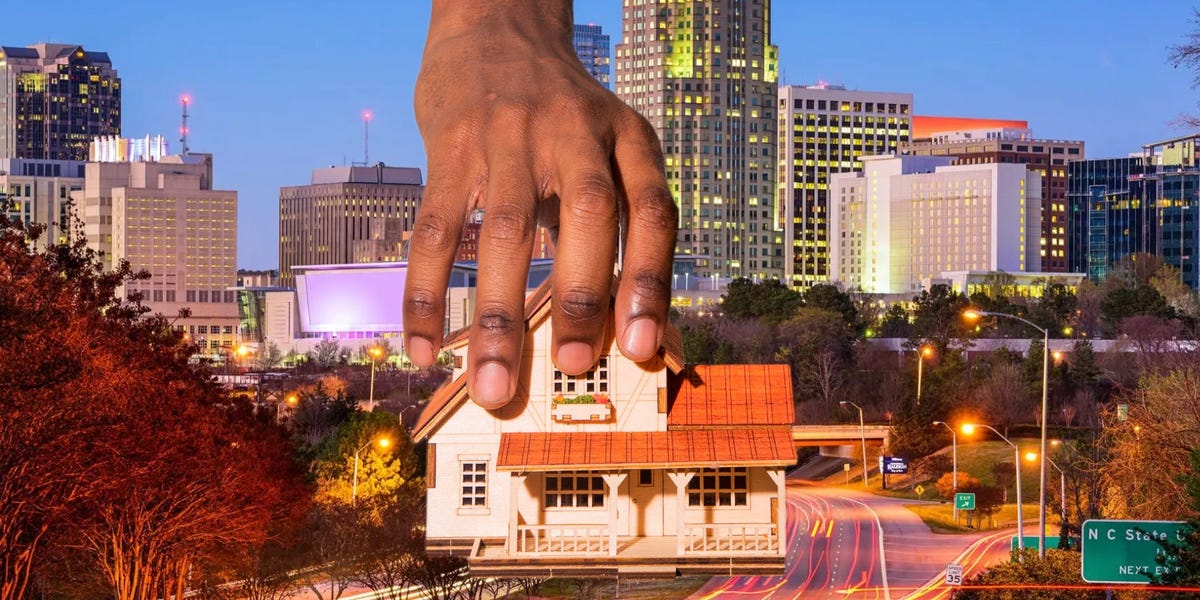 Aubrey McCarn, a millennial teacher, made an offer on the asking price for the very first home she visited in Raleigh, North Carolina, in June.

As a hopeful first-time home buyer navigating a crazy pandemic-hit real estate market, she knew she had to be intentional and aggressive. And she wasn’t surprised to lose this bidding war.

“They only showed the house for one day,” she told The News and Observer. The property had 20 potential buyers who visited the open house and 15 of the visitors – including McCarn – made an offer. “That one sold for, I think, $ 40,000 above the asking price,” she said.

The competition in Raleigh is fierce. Brokerage Redfin just found out that about 87% of homes in the local market experienced bidding wars in August, making it the fiercest real estate market in the country. Less than half of the homes on the market saw bidding wars last August. Separately, Zillow found that the typical value of a home in Raleigh was $ 371,544, up 23.5% from last year, while the typical value of a home in the United States was $ 303,288, up 17.7% from last August.

Across the country, the national housing market is showing early signs of cooling. Redfin found that the national average of homes that had bidding wars in August fell to around 59% – the lowest level since the start of the pandemic.

Yet Raleigh’s local market has remained vibrant, in part due to the region’s emergence as a technology hub.

Big tech companies have had a significant presence in Raleigh for years. IBM was the first major company to set up in the region. An outpost launched in 1965, shortly after the opening of Research Triangle Park, a 7,000-acre campus that is home to science and technology companies as well as startups, nonprofits, and government agencies. Today, IBM has more than 8,000 people working in the park and has probably inspired other big companies like SAS Institute and Cisco Systems to open their shops there.

Even though tech companies have grown steadily over time, the pandemic has given the region a noticeable boost.

A recent LinkedIn analysis found that Raleigh has been attracting dozens of relocated tech workers since at least 2019, with its local tech talent now making up over 9% of the population. It landed at No.3 on LinkedIn’s list of metropolitan areas with fastest growing tech communities, behind Madison, Wisconsin and Colorado Springs, Colorado.

Brian Xu, a senior data scientist who worked on the report, told Insider the reason is twofold: University graduates are choosing to stay near their alma maters after the pandemic, and big companies are considering these once-maligned college towns as being second level.

Metro Raleigh is home to a “triangle” of universities: Duke University, the University of North Carolina at Chapel Hill, and the State of North Carolina, all of which have strong science, technology, and engineering programs. . Research Triangle Park sits between the three schools.

“If you were a student and moving to an expensive big city,” the recent increase in remote work has probably inspired you to “stay close to your college town,” Xu said.

And now, in a world where employees have the power to choose where they live, “a lot of businesses traditionally in San Francisco and Seattle are actually paying more attention to small and medium cities,” Xu said. “People want to live in mid-sized cities with affordable prices and bigger houses.”

Case in point: In April, Apple pledged to build a billion-dollar research and development campus that will attract 3,000 additional tech workers to the region. He followed Google, which announced the creation of a Google Cloud hub in Raleigh that would create more than 1,000 engineering jobs in March.

“It could be the flipping of the switch, taking us from one of the most affordable markets in the United States to a luxury market,” Camille Malcolm, local real estate agent at United Real Estate, said of the arrival of Apple in the region. “With their minimum wage so high,” she continued, “it could really end up pushing people out of affordable housing.”

Insider previously reported that some senior jobs at Apple can pay up to $ 325,000.

George Roa, who is looking to buy a modest starting house in the Research Triangle after moving from New York, told a local CBS affiliate that it was hard to compete with that level of capital. “Sometimes the minute the house is on the market it’s gone,” he said. “Sometimes you don’t even have the chance to go see it,” he continued.

Malcolm called the current market “super emotional” for those who can view a property. “If you stop at a house and like the neighborhood and the house has everything you’re looking for,” more often than not, “as you walk through the door, another potential buyer walks in,” Malcolm says. And that buyer is probably from out of town and probably has a higher budget than you, she added.

“Make your best offer,” Malcolm recommended to contestants. Sometimes that includes forgoing due diligence or praying “you have family members who are willing to give you money for the offer,” she said. “These houses don’t even stay on the market for a week.”

McCarn knows this stress firsthand: “It’s a little scary,” she told The News and Observer, “to have to offer at least $ 10,000 more than asking price and to be diligent reasonable before having the house inspected “.

She finally took advantage of a pre-approved mortgage to put down 21% on a $ 300,000 house that was only on the market for four days in June.

Do you have a story to share about your own home search or moving to Raleigh? Contact this reporter by sending an email to [email protected]

Inspired by a tragedy that struck the house, a real estate company reaches out to those in need