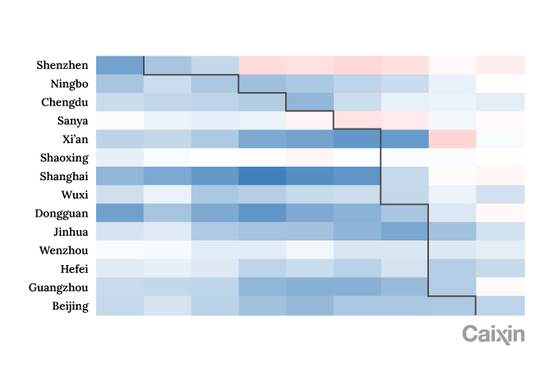 New York-listed shares of a Chinese residential real estate agency KE Holdings Inc. are up nearly a quarter since the firm said Monday it plunged more than 1.7 billion yuan into the red, due to a one-third drop in sales of existing homes.

The rally, which suggests markets may have expected worse results from the Tencent-backed company, comes as the liquidity crisis at developer Evergrande continues to scare the real estate market, regulators and investors, and in the middle strict regulation on mortgage issuance and housing prices.

The KE share price closed 24.2% higher at $ 22.26 on Wednesday from Monday’s close. Analysts at JPMorgan Chase & Co. upgraded KE on Monday from neutral to overweight, saying its shares would likely rise to $ 30.

In the three months to September, KE reported a net loss of 1.77 billion yuan ($ 276 million), compared with a net profit of 75 million yuan last year. Revenue fell 11.9% year-on-year to 18.1 billion yuan, according to Monday earnings report.

This dismal performance is mainly due to “a significant downward trend in the market for existing real estate transactions in first-tier cities and most second-tier cities,” said Stanley Yongdong Peng, CEO of KE, at the time. of the conference call.

Despite the loss of the company, the market response has been optimistic.

The KE stock price closed 24.2% higher at $ 22.26 on Wednesday from Monday’s close, after the stock plunged in the third quarter as the Evergrande crisis rocked investor confidence in the Chinese real estate market. From just over $ 50 on June 25 to its low on August 20, the KE share price has fallen nearly 70%.

Second-hand housing transaction volume in 13 major cities fell 30.6%, 36.6% and 46% year-on-year in each of the three months through September, according to a report by Shanghai Yiju Research Institute, an organization specializing in real estate. thinking group.

Volume fell another 42.8% year-on-year in October, according to the report. The crisis continued even as the banks expanded their mortgages compared to the previous month, the easing of the brakes put in place last December by the banking authorities to cap outstanding mortgage loans in proportion to total bank loans and their ratio of outstanding mortgage loans to total loans.

Read more
Cover article: How the Chinese housing market landed in the cold

In a remark, Wang Tao, UBS chief economist for China, wrote that “the cycle of superurbanization and ownership in China is behind us.” Wang predicted that property sales and starts would continue to decline in 2022, at worst dropping as much as 20%.

In February, Shenzhen introduced benchmarks for second-hand properties in 3,595 residential complexes and banned banks from offering mortgages above benchmarks. Owners, however, still tend to charge prices up to 50% higher than the benchmark, which significantly affects sales.

KE’s chain of estate agents, Lianjia, revealed in an internal memo in early September that she close a hundred offices in the metropolis of southern China.

Many other major cities then followed in Shenzhen’s footsteps, including provincial capitals like Canton, Chengdu and Xi’an.

Ren Jing contributed to the story.

To download our app for getting late-breaking alerts and reading news on the go.

To have our free weekly newsletter must read.

You have accessed an article available only to subscribers

BuyLetLive is the real estate company you need!